First of all I must apologize for not writting here for a long time. As I wrote here before, I've had some problems with the blog and now I still can't post maps or pictures here... Indeed, I really wanted to writte something here before closing this space.
Last season was like a roller-coaster, with several ups and downs and in the end, with a disastrous outcome: I felt sick and tired of orienteering competitions. I really needed to stop, analyse and reset goals. And that's what I've been doing: I had a big break on my training and now I'm slowly coming back :) I love running and training, so I'll keep this way and for sure I'll find the best answer for my future ;)
em 12:12 3 comments:

Last weekend the first portuguese national champs started with long and relay.The terrain was really nice, starting by the sea on the sand dunes and then some long legs on the pine forest. My race wasn't good as I wanted. I started very nervous and at control number 4 I was already loosing about 3 and half minute.During all race I never felt I was running on a good flow as I was always making stupid things - from 15 seconds mistake at the control area till 3'mistake on a stupid route choice. I started quite nervous and couldn't manage the feeling during a big part of the race, so my legs weren't working good as well.Surprisingly I crossed the line with the best time and it was great to hear that I got the gold.
Unfortunatly I keep the same problem on my blog on posting the maps so you can't see the mistake show I made. Actualy when analysing and comparing with previous races, I made one of the higher percentages of mistakes - 11,73% (I ran 1h15'53'' and made 8'50''mistake). In the end of spring I improved a lot and averagely I was doing 6% mistake on my races, but now it rised that so very much...nerves??
Relay report in a few days!!! ;) (and hopefully the blog will be working normal and I'll most maps and pictures!)
em 21:53 No comments:

Tiomila is a fantastic race by itself. But like two years ago when I ran tiomila for the first time, the best feeling I bring back home the feeling of running as a team. Five girls giving their best for each other is superb.

In spite of my anemia, I’ve been able to run and spend some good time on the forest. I didn’t know how my body would react when competing again, but surprisingly I felt quite good and back on business.

This year Tiomila was held quite close from SNO-home ground and so everybody was looking forward to this! I had one training on relevant terrain on Friday and quickly understood how to play on this game – it’s fast and detailed so if you lose map contact for a moment everything look the same.

And on Saturday, at 1pm all SNO girls were carefully listening our coach (and runner) Kricko…ready for the big moment! After the meeting I started to feel the nerves and butterflies on my belly…! I ran the last leg on the second team with Jo, Lovisa, Karin and Jeanette.
My race started quite ok without big mistakes, but right after a while I started to lose self condifence and many mistakes appeared. Specially after the map change, on the way to number 150 I lost my concentration a bit and did two huge mistakes on that part. I ran most of the race by my own, but there some following group came and caught me. We ran a few controls together till we separate on the way to control number 162, because of different route choices. Then I just kept the speed running with three other girls and ran as fast as I could on the finish line to get the best place between us.

We finished at 93th place what means that the top100 goal was achieved. But that’s not the end of the story…!

After the race we come back home to take some rest (almost impossible with all the excitement of the men’s team being running). But just after a few hours Karin woke me up asking «Do you want to go running the 8th leg of the men’s SNO 5th team??» I didn’t even think twice and just say «yes! Of course!». We quickly get dressed, have some breakfast, drive to the arena and at 8pm I was starting a long tiomila men’s course. There I realize how tough it was and how hard men have to play. It was a great experience to run with such a huge map, huge legs on such a demanding terrain! ;) Unfortunately I couldn’t see Matthias arriving and celebrating the 3rd position, but just on time to see them on the podium. This year’s tiomila was very special: SNO won the junior relay, then the women did great job, we had 10 teams running the men’s relay (one of those were only girls team) and finally the SNO men reached the podium! That was amazing!!!

Ps- Thanks a lot to Karin, Matthias and Scott, my closest friends there, who are always so very welcoming and help me so much on the way to make some small dreams come true.

(Sorry but there's some problem with my blog and I can't attach my maps...as soon as it works I'll post it here)
em 16:35 No comments: 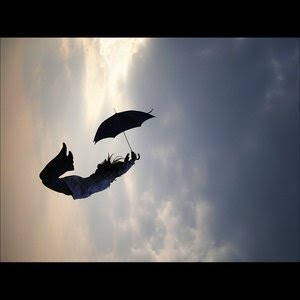 That's the moment when you uncomfortably feel different, but in fact don't realize big changes or big moves... but slowly you're going down, down, down...During the last month I've been feeling tiredness, exhaustion, some apathy during racing and running the toughest trainings but in fact couldn't find a reason why. Maybe too much work/travel/training...? but even after one week of light training regeneration last weekend I couldn't race as usual...I felt I was just runing on the forest and not fighting to do my best.. running on the same speed as a turtle. Something should be wrong I thought! And easily with a blood sample I realize my hemoblogin was only 10,3 g/dl and my hematocrit 30%...
Well, now that's the moment when I realize I was free falling. Slowly, just watching the view, watting that the parachute opens! It seemed everything was going easily on the right direction with my training - no injuries, just a small cramp on the right leg sometimes...and now I've got this friendly anemia.We never know what is just behind the corner right? Now it's time to rise head and recover as fast as possible!!!
I would also call a "free fall" to the mistake I did on sunday long distance. After 9 controls I did, maybe, the biggest mistake over the last years. Around 10min on a paralell mistake of course took me out from the lead and totally devastated my motivation to run the rest of controls.... here is the jewel: 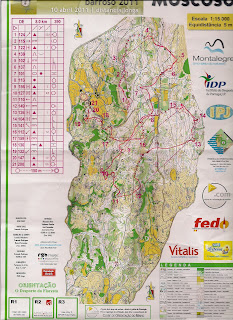 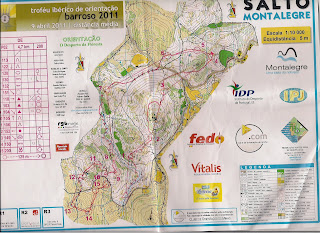 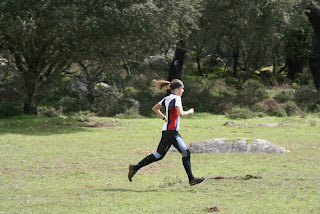 And so, last WRE held in Portugal this season was brilliant. Looong, hard and demanding, both technically and physically, great arenas and overall organization. Besides tricky and tough course, the rainy days gave some help and made it even harder, as all the hard, grassy and fast ground become wet, soft and tough. 13,4km, a long leg with about 3,7km easily become the hardest long distance race I ever ran in Portugal. It's a pitty that we don't run so often this races in Portugal and clubs don't plan courses like that.
Personally, I was pretty disappointed with my technical performance as I made a lot of mistakes (around 12 minutes), but physically I felt fine and able to keep a good pace during all the race. Happily I finished 5th and made by best score at a WRE. Map here 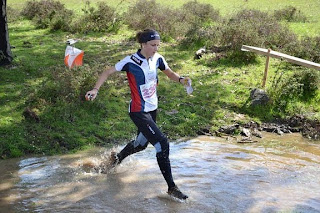 A part of the WRE, on saturday it was held a nice middle distance - quite easy on the beggining and tricky on the last part. On the start I was feeling very tired and with a huge headache as I only had 4h of sleep!!! (long journey from Porto to Arraiolos on the night before). During all the race I felt heavy and slow running and my technique wasn't so good as I would like for a middle distance. Map here
Luckily I spent a very nice time during the weekend with my swedish club -SNO. Next goal is Tiomila and I'm really looking forward to run my first race on SNO blue and yellow colours :)
em 21:34 No comments:

Since 2002 I've been running POM...but this year, unfortunately I couldn't take part:( Work at the hospital on monday didn't allowed me to run the WRE and during the other days I couldn't take part of the organization because of work too (my club was the organizing team). It seems it was a huge top level orienteering festival.Congratulations to GD4caminhos that did an excelent job!
Well, and around here my training is going quite ok. Besides my weekly 40h of work at the hospital and thursdays 12h work on the ER, I can manage to do 2 good training sessions per week and of course. I overpass some flu, cramp on right leg...and for now everything seems to be ok.
Last weekend I ran a nice orienteering competition - middle distance in the morning and night relay on the evening.In the morning it was very messy and lost so many seconds on several mistakes...luckily I was the one who miss less and got the victory. 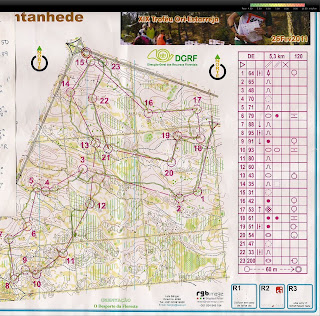 At night relay it was great fun!! As the last runner and because my team was a bit too late I had to start on a mass start. I was on the leading group to the first control but after a while on the way to the second control I found myself alone on the dark forest.Everything went well (according to my experince on night orienteering!!) on the dark long 7km with very interesting final part: at the espectators control I was just 20'' bahind the leading group. After two controls on the forest I was able to get the lead but in the end I wasn't enough fast to run 200m on track to beat these men. I was happy and tired. I just love the feeling ;) 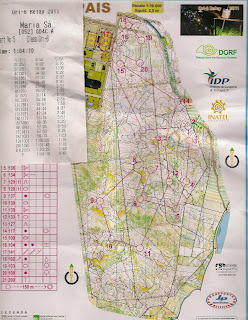 When the doctor become the patient

The daily life of a doctor at the pediatric hospital is like survinging on a jungle. You are surrounded by thousand of virus and bacteria that can catch you anytime... and easily you become the patient :) There're two weeks I've been feeling weaker, coughing and sneezing (without fever), but last week I couldn't hold it and got a terrible flu. I'm still recovering and hoping to be better for next weekend competition. I'll run a mixed night relay, 6 runners from different categories that starts at 4pm...I'll run the last course (7km) by night and I'm really looking forward for it!! Till saturday I have to keep killing my virus but it won't be that easy...tomorrow I'll have 12h work at the E.R. and friday still 8 hours to work. That's my work, my passion and I'm happy with my job. Children are lovely and it's very rewarding work :)
em 21:33 1 comment:
Older Posts Home
Subscribe to: Posts (Atom)